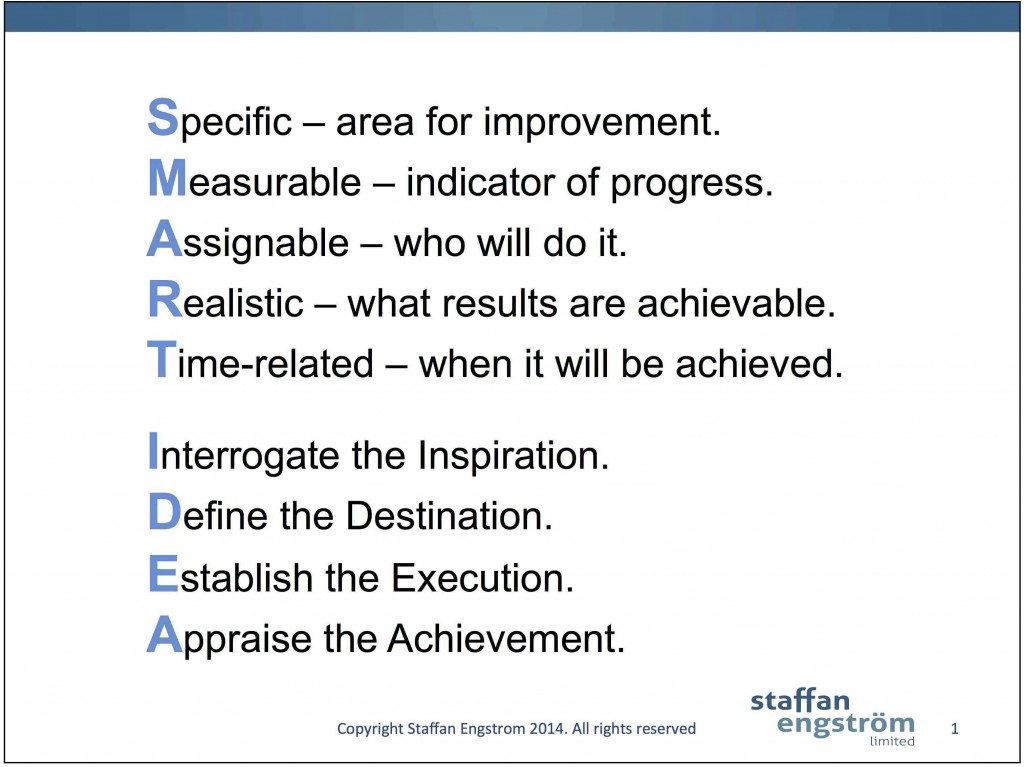 Turning great ideas into clear, deliverable, plans is a major frustration for many leadership teams. Having the ideas is one thing, but there are so many conflicting thoughts, issues, and choices to consider, that the ideas don’t take off. High-flying ideas fail precisely because they are not properly grounded in reality. In other words: Get your ideas grounded or they won’t take off!

Most people have heard of how setting SMART objectives* can transform delivery through defining what must be done, by whom and when. SMART IDEAs extends this concept into delivery.

There are four steps to the IDEA approach:

Clarify why the idea looks like a good one from the start, so that you don’t waste time. For example, if it is a business improvement idea, what precisely will it do for your P&L, balance sheet and cash flow? If it is to increase your sales, then who will buy it, why will they, is there enough likely demand, and are you the right people to take it forward? What other things will you have to stop to give it the required focus? If you can’t answer these questions then you may find that your great idea is not so great after all.

When you are clear that you have a genuinely good idea, the next step is describing the best ‘vision’ of what the idea looks like. By ‘vision’ I don’t mean the kind of woolly words that so often end up in office reception areas. I mean the clearest practicable description of the future that the idea will create. This is often the hardest part, because there are usually multiple different options, however making the choices for a ‘best-fit’ provisional destination is usually vastly better than having none at all. A boss of mine said to me years ago that we were heading North not South. In other words, it is better to head North now to make some progress, even if you tweak the direction later.

Once you have a clear destination in mind, you have a chance to plan how to get to that destination, and to get everyone on board with it. This process creates the best collective action. Create a step-by-step SMART action plan, that describes who will take what steps and when. People often don’t like planning in this way, because it takes quite some effort, they think that there is risk of blame if things don’t happen in quite the way that they say, and frankly it is more fun just to get on with things. However, the reality couldn’t be further from the truth. Creating a SMART action plan provides clarity, empowerment, and delivers results, because everyone understands what they have to do to support the plan, and have the confidence that a credible plan exists.

Distributing and regularly appraising an agreed plan will give you additional leverage to get results over and above the authority that you can muster just on your own. The appraisal of the plan is critical, because of the adage ‘what gets measured gets done’. Regularly published status updates of the plan to the stakeholders and leadership proactively reminds people what they have to do. Marking each completed step with ‘DONE’ shows progress and enhances your reputation for delivery.