I was chatting to an Operations Executive today who was bemoaning the difficulties in his organisation of coping with people who don’t want to change, and who were thwarting his improvement efforts at every turn. I referred him to the principles of the energy/ attitude model, shown below.

When it comes to managing change there are basically four ‘types’ of people, defined on the two scales of energy and attitude. They have positive or negative attitudes to change, and can be either lower energy or higher energy when it comes to getting things done. 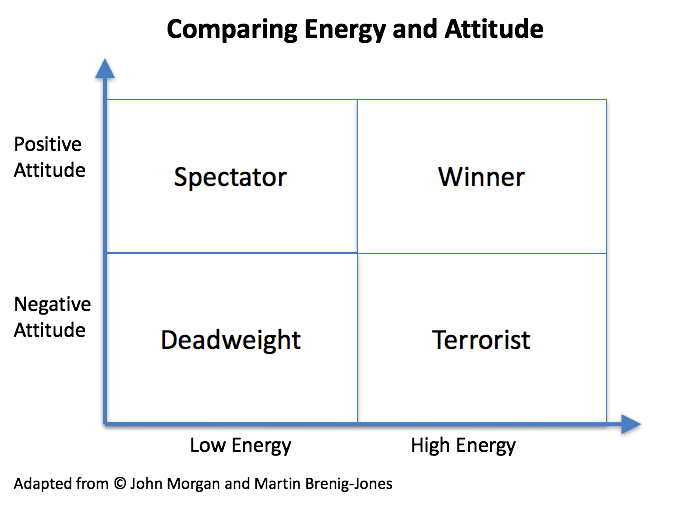 Winners have a positive attitude to change and get stuck in to make it happen.

Spectators have a similarly positive attitude, but just don’t have the energy to follow through.

Deadweights are negative to change and have such low inertia it is hard work to get them going.

Terrorists have a negative attitude, but also the ‘get up and go’ to make things really hard for you..

I advised the Operations Executive who was contemplating big change, that he needed first of all to map the key players involved onto this grid, and then:

1) Tackle the terrorists head on: whether by converting them with some hard-nosed ‘change or be changed’ conversations, or by moving them sideways, out of harms way.

2) Promote the Winners into roles where they can really help to make the change happen.

3) Help the Deadweights understand that they need to get on board because the change is happening and setting clear, measurable targets for both them and the Spectators to deliver what they must.

How effective would your change programmes be if you tackled people issues in this way?